Cultivating a life we love from scratch.

I suppose it’s possible that not every human on the big spinning blue and green earth loves spaghetti. But in most circles, I can almost bet that very few folks would turn their nose up at a nice, piping hot plate of noodles and sauce, blanketed with some freshly grated parmesan. Believe it or not, I’m apparently one of the few people on the planet who was not born with that innate, mad passion for this highly esteemed Italian dish of delectable splendor.

But guess what? I fell in love with a man and birthed his children. Three of them, to be exact. As they have grown older over the years, their appetites have grown right along with them and I’ve learned what it means to budget the grocery bills. Therefore, I’ve also learned to acquire a taste for spaghetti.

Not only is spaghetti cheap to make, it easily feeds roughly 2 billion people at one sitting. This is important. Especially when you have growing teens who often bring growing teen friends to the dinner table. Let’s do the math, shall we?

Not to mention there’s another silver lining to serving spaghetti. It’s called: Leftovers. Leftovers here at the homestead seldom sit in the fridge for weeks on end growing their own perfect little ecosystems in my Pyrex. Why? Because I force them on my family. That’s why. I like to call it “Déjà vu Dinner Night” which basically means that about once per week I clean out the fridge, line up all of the leftovers on the kitchen island and then we eat them. Brilliant, right? The meals that keep on giving the gift of sustenance even after the first entrée make me a better, kinder, gentler Mother. My fuse is longer. My brain is quieter and my kitchen ultimately stays cleaner for longer periods of time. And that alone is basically a miracle. Besides, why reinvent the wheel? If it was good enough to eat last night, then it’s good enough to eat tonight. Two nights in a row of spaghetti for dinner means more unwind and space out time for the chef. (Ahem, that would be ME.)

No more sauce but plenty of noodles? Make a white sauce and serve alfredo. No more noodles but plenty of sauce? Toss it into a bubbly pot of chili or bake up a nice dish of chicken Parmesan, throw a salad together and dinner is served. Spaghetti for lunch the next day? You betcha! Spaghetti as an after-school snack? Heck yeah! Shoot, my kids have been known to eat cold spaghetti for breakfast! Why not?

And finally, there is one last reason that I’ve learned to fall head-over-heels in love with spaghetti.

I have a passion for growing my own veggies. Therefore, I also have a passion for finding ways to use them up before they expire. I have come to find that canning and food preservation is the only sure-fire way to save my beloved tomatoes and peppers from certain rot. I mean sure, people like me. I have friends. But I can only force tomatoes on so many unsuspecting folks before they stop coming around. So this year I’ve used several different spaghetti sauce and marinara canning recipes in my efforts to stock the cupboard for winter and to protect my beloved mates and peps from melding into a puddle of smudgy, black, droopy, smush.

The recipe below comes straight out of the Ball Blue Book guide to preserving. Of course I can’t leave anything alone so I tweaked my batch a bit with homegrown herbs and spices. If you’ve never put up yumminess for the winter, I highly recommend purchasing this gem of a book to help you get started on your new obsession! Let’s swap recipes soon.

Yield: About 7 pints or 3 quarts

Combine all ingredients in large saucepot. Cover and cook 10 minutes. Stir occasionally to prevent sticking. Ladle sauce into hot, sterilized jars. Leave 1 inch headspace. Adjust 2 piece caps. Process pints for 20 minutes or quarts 25 minutes at 10 lbs pressure in a pressure canner. Also, this is a wonderful recipe to toss into chili or even veggie soup. Enjoy! 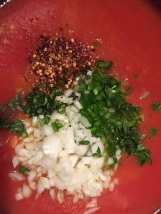