Cultivating a life we love from scratch. 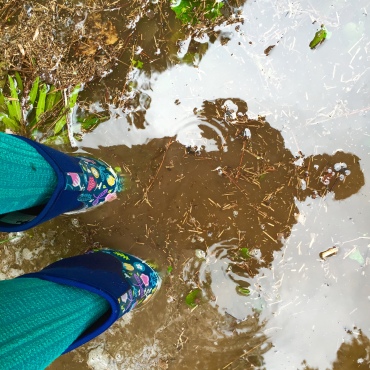 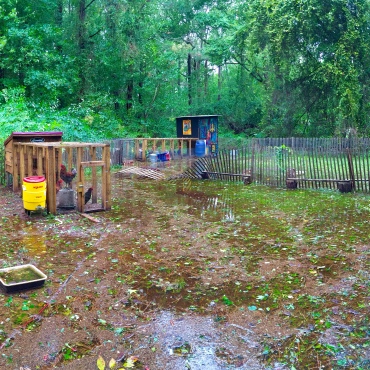 Yep. That’s my chicken/turkey pasture after Tropical Storm Hermine moved through over the weekend. It could have been much worse, but if you’ve never smelled the soaking wet poop of 40 birds floating in floodwater, then you might beg to differ. Luckily, all the chirpers made it through the storm unscathed. The saturated earth dried up in about 24 hours and now I have the pleasure of poop scooping. It’s quite all right though, a blessing actually. I’ve needed a proper kick in the keister to get me motivated to scrub out the hen house and the Palatial Poultry Palace. Besides, I like the idea of getting everything cleaned out and cleaned up at the start of the Fall season anyway. Between the garden and the poultry pasture, I’ve got my work cut out for me.

Yep. Those are some of my turkey friends. They were quite incensed with me when I snapped this photo. You see, I raise my birds the same way I raise my children. I let them wander around and check stuff out and make sense of their world all the livelong day. Until I have reason to fear for their wellbeing.   Then everybody is on lockdown. For example, my turkeys and chickens like to roam around in the woods. However, during the storm lots and lots of branches were falling everywhere. And not just branches, but a few whole trees in our surrounding woods took a dive over the weekend. I’m not going to let my birds roam around aimlessly during a potential deadly weather event. They were very disappointed to be forced into captivity. Basically I made them hang out in their enclosed run for about 30+ hours. Our 3-year-old son could relate all too well. As a matter of fact, had I taken a picture of his face during the storm, he would have given me a similar look. He wanted nothing more than to be outside in the wind and rain and wildly blowing mess of Mother Nature’s moment of fury. But, nope. I love my birds and babies. They must stay safe from 100-year-old trees giving up the fight on a rain day.

Several hours before the storm moved in, my Hunk called a local guy to come out, climb up and remove some of the massive branches from an old tree hanging over the roofline of our house. I like to tease my studly spouse about his “worrisome, 90-year-old man attributes” but I’d be lying if I said he was not justified in his concerns. There is no doubt in my mind, had we decided to take a chance and wait to remove the rot spots at a later date, we would have surely been dealing with insurance claims this week. I appreciate the proactive mindset of my husband.

He’s all… “The logical choice is to prevent a giant hole in our roof or the death of a family member, we’re doing it Hon.”

Such a loving protector of his home and fam. Not to mention Jabba man was in hog heaven watching the guy climb the tree and cut out the branches. Toddler entertainment for hours!

Speaking of trees! Look at these glorious beauties swaying in the wood smoke and dancing to the break of day.

The little guy and I were quite productive yesterday. We woke up with the sunrise, put the sisters on the bus for their very first day of school and then we went straight to work, collecting branches and debris and tossing everything into a miniature bonfire. It was fun until a piece of broken pinecone apparently fell into my coffee mug while I was working. Then I sipped it and almost choked to death. Not cool. But we accomplished a lot yesterday and I survived. So, yay!

And let me tell ya, our little Jabba man can work! 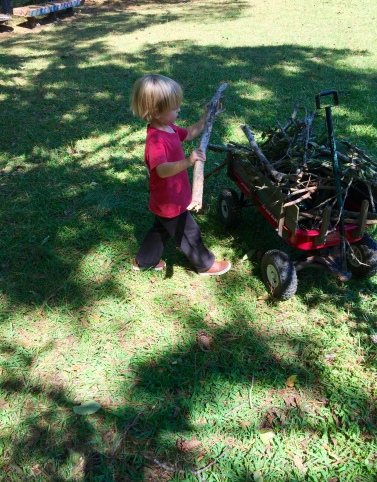 I went down our long driveway this morning just to get a better view of the sun rising up over the trees. That old reliable seasonal shift is making its way into existence. Sure, the sun still likes to mosey on up in the morning the same way it always does, but it just feels slightly different to me lately. I know we’ll still have some red-hot days ahead of us before Fall really takes hold of the sky and breeze here in coastal Virginia, but I feel the shift. It’s coming on, slow and steady.

Have a great day my friends and be sure to snag a smooch from the ones you love most.

2 thoughts on “After the Storm”